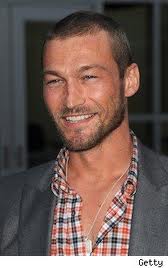 Andy Whitfield, star of the Starz Entertainment series "Spartacus," died in Australia yesterday at the age of 39. He lost his short, but courageous, fight with non-Hodgkin's lymphoma. He was diagnosed with the disease in March 2010.

Born in Wales, he made his home in Australia, modeling and appearing a number TV shows before being cast in his best known role in the Starz series "Spartacus: Blood and Sand." Whitfield played the title role of a soldier who leads a rebellion against the Roman Empire, becoming an instant hit.
After being diagnosed with the devastating disease, he underwent treatment in New Zealand. Shortly after starting treatment, he was declared cancer free, but suffered a relapse later that year.
His wife, Vashti, issued a statement confirming his death. "On a beautiful sunny Sydney morning, surrounded by his family, in the arms of his love wife, our beautiful young warrior Andy Whitfield lost his 18-month battle with lymphoma cancer ... he passed peacefully surrounded by love," the statement said. "Thank you to all his fans whose love and support have helped carry him to this point. He will be remembered as the inspiring, courageous and gentle man, father and husband he was."
Posted by Ask Meg D at 10:07 AM